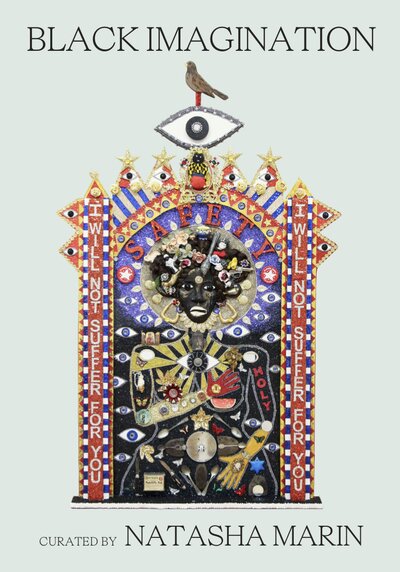 For a very limited time get a copy of Natasha Marin’s best-selling and groundbreaking volume Black Imagination signed! Limited to 40 copies. Please note that due to delays we cannot guarantee immediate shipping.

“Don’t think for one minute that Black Imagination is easy. As you will read here, it is hard-earned and sometimes dangerous, but it’s necessary, and radical, to claim and work towards. Listening to my people in this book gave me so much life, and I’m pretty sure, dear reader, you’re in for the same.” —from the Foreword by Steven Dunn

“Witnessing is sacred work too. Seeing ourselves as whole and healthy is an act of pure rebellion in a world so titillated by our constant subjugation,” reflects viral curator Natasha Marin on Black Imagination. This dynamic collection of Black voices works like an incantation of origin, healing, and imagination. Born from a series of conceptual art exhibitions, the perspectives gathered here are nowhere near monochromatic. “Craving nuance over stereotype, we sought out black children, black youth, LGBTQ+ black folks, unsheltered black folks, incarcerated black folks, neurodivergent black folks, as well as differently-abled black folks.” Each insists on their own variance and challenges readers to witness for themselves that Black Lives (and Imaginations) Matter.

“Our bodies and actions are under external control, but the well-spring of rebellion is our own imagination. In Black Imagination, Natasha Marin shows us how to free our imagining—as a first step toward freeing ourselves.”
—Gloria Steinem

“Black Imagination is somehow as innovatively utopic as it is sincerely soulful. I’ve never felt the physical feeling of pages melting in my hands or chapters folding themselves into squadrons of black airplanes flying to freedom, because I’ve never experienced an art object like Black Imagination. It is exquisite art in action.”
—Kiese Laymon, author of Heavy

“Have you ever read a book and realized you’re reading something you didn’t know you needed? This is not a book to simply read in total and digest—yes, do that—but it is also a work to return to in parts whenever necessary. It’s a book to ingest like medicine, because it is that. Lastly, it is a reminder that joy, too, is necessary and also a form of resistance.”
—Rion Amilcar Scott, author The World Doesn’t Require You

“In an age where spirituality has a price tag and crystals, teas, and sage reign supreme, this book is a welcome rebuttal. Black Imagination shakes us out of our cultural trance and reminds us that so much of what we deem to be true is learned, and so much of what is actually true has to be remembered. With the storytelling talent of Griot tradition this book is required reading for the African diaspora.”
—Akilah Hughes, author of Obviously: Stories from My Timeline and host of Crooked Media’s What A Day

“Weaponize[s] a conceptual work of art in the asymmetrical war that is race in America … the words penetrate the defenses and break your heart.”
—Dr. Jon Woodson, author of Summer Games and The Esoteric Mission of Zora Neale Hurston

“Moving, nuanced, and realer than real, Black Imagination is a necessary archive for these times. This unique project asks Black people to respond to three simple yet profound questions about one’s origin, self-healing rituals, and alternate world visions in which Black people feel safe and are valued. The rawness of these pages, along with a versatility of voice and vision, makes for an immersive read that galvanizes the imagination and massages the heart.”
—Samantha Thornhill author of A Card for My Father

“What happens when the Black imagination thrives, unburdened by the white gaze? This collection reaches across time and generations, cities and continents, identities and experiences, to answer: We fill the unburdened space with rituals, remembrances, and discoveries, with our joys and vulnerabilities. The contributors’ poems, vignettes, and smaller morsels of language come together to form a chorus, their voices recurring in multiple passages throughout the collection, to powerful effect. Black Imagination is a freedom song, deep-throated and resonant. The collection also answers the age-old Black question—Where your people from?—and builds on it: Where do you go to heal? And there is healing in the pages of this collection, medicine in the lines.”
—Deesha Philyaw, author of The Secret Lives of Church Ladies

“It’s fitting that this project began on the backend of Marin’s two reparations projects—the first for folks to reach out to each other; the second Marin’s healing of herself—cause this here is a catalogue and a map. One of the riffs begins ‘legend says that I was born in the back seat of a Cadillac,’ and you know Avery Young is telling you all that’s needed to know he survives. These pieces, together, are a kind of rent party, a reminder that Black folks can gather in a room and heal. ‘Coping is ever so awkward,’ as Natasha herself says—but damn if it ain’t necessary. And damn if that coping itself does turn into a beauty here, a Black imagination makes all of us better.”
—Reginald Dwayne Betts, author of Bastards of the Reagan Era

“Black Imagination required Natasha Marin to curate as a curate in the medieval sense—a spiritual guide that cares for souls. This assemblage—at once a book, an installation, a secret meeting, and a waiting room—dares to sing an aria in white and violet with Brooks. We are challenged to move beyond the abject, beyond pure pessimism, on the wings of a different criticality—to walk with Hayden, with Douglass ‘visioning a world where none is lonely, none hunted, alien.’”
—Christian Campbell, author of Running the Dusk