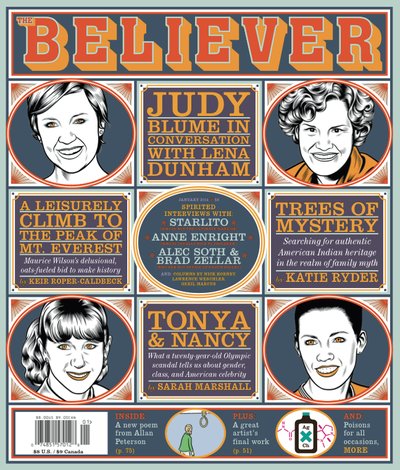 Remote Control by Sarah Marshall
Revisiting the myths and media narratives behind the off-ice melodrama of Tonya Harding, Nancy Kerrigan, and the 1994 winter Olympics.

The Ecstasy of Maurice Wilson by Keir Roper-Caldbeck
The story of a British adventurer who tackled Everest alone in order to prove the power of faith and fasting.

Real Life Rock Top Ten by Greil Marcus
“You get the feeling all of the people here could walk out of the gallery and into any other place and buy whatever they want with the currency of their mere existence.”

Indian Lake by Katie Ryder
Digging up the tangled roots of Americans’ (generally erroneous) belief in their own Indian heritage.

Schema: Appointments with Death by Shoshana Kabas
A survey of the various poisons used for nefarious purposes in Agatha Christie novels.

Anne Enright interviewed by Conan Putnam
“There is a run, a fantastic slide toward the end.And with the run there is this terrible pang of loss.”

The Process by Chris Clayton
Alec Soth and Brad Zellar talk about the LBM Dispatch and its recent focus on the Silicon, Death, and San Joaquin valleys.