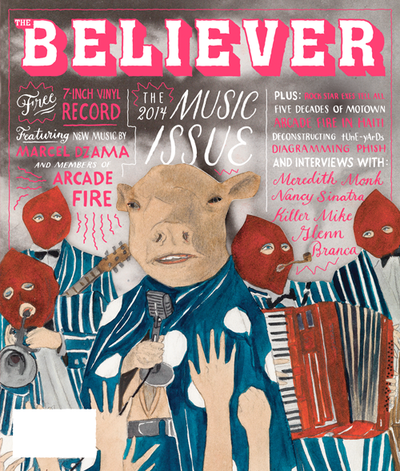 Marcel Dzama in conversation with Will Butler
The artists chat about music, dance, and childhood to mark the release of the soundtrack to Dzama’s new film, included in this issue.

Reflections of Jacmel by Joshua Jelly-Schapiro
On the trail of Arcade Fire as they tour an unexpected locale: Haiti.

Without You I’m Nothing by Alexandra Molotkow
Exploring a seldom-considered but surprisingly fruitful literary micro genre: the memoirs of rock stars’ ex-lovers.

Forgetting the Motor City by Douglas Wolk
Exploring the hits, misses, and mysteries of fifty years of Motown records.

Nancy Sinatra interviewed by Erik Morse
“When I was crying at the very end of the take, Lee was celebrating in the booth. And he kept that take. But that’s what happens when you’re acting a part. You get wrapped up in it.”

Glenn Branca interviewed by Joseph Neighbor
“New ideas tend to come from people who haven’t been indoctrinated by the establishment.”

Killer Mike interviewed by Eric Ducker
“The beats will tell me what to do.”