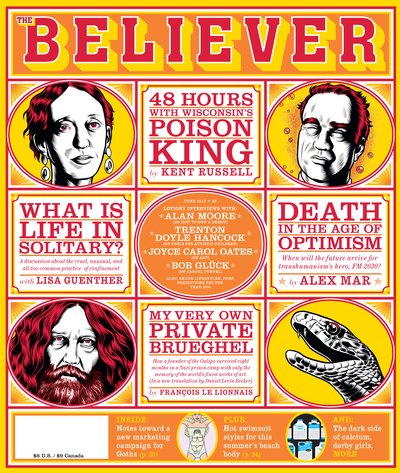 Mithradates of Fond du Lac by Kent Russell
Will Tim Friede, a self-immunizer with no medical training, be the first human to survive five venemous snakebites in one weekend?

“The Boss Tells Me”: a new poem by Victoria Chang

Man of the Future by Alex Mar
Fereidoun Esfandiary envisioned a world in which humans were limited by nothing—not even death.

Painting at Dora by Francois Le Lionnais
Surviving the winter in a concentration camp by touring an art museum of the mind.

Schema: Movie Villains (and a Dude) Who Drink Milk by Sarah Bean Freed

The Process by Scott Zieher
A conversation with the artist Trenton Doyle Hancock about his painting Kept On Keeping On.

Alan Moore interviewed by Peter Bebergal
The writer of Watchmen, The League of Extraordinary Gentlemen, and much more discusses art, magic, and creating gods.

“Japanese in Three Weeks” : a new poem by B. Alexandra Szerlip

Bob Gluck interviewed by Miranda Mellis
“By the time I am done with a book, I haunt the sentences, I remain in them, that is where I exist.”

Lisa Guenther interviewed by Jill Stauffer
Part two of three in an ongoing series of interviews on criminal justice, incarceration, and solitary confinement.

Joyce Carol Oates interviewed by Agnes Barley
“I never dreamed that I would have a long career.”