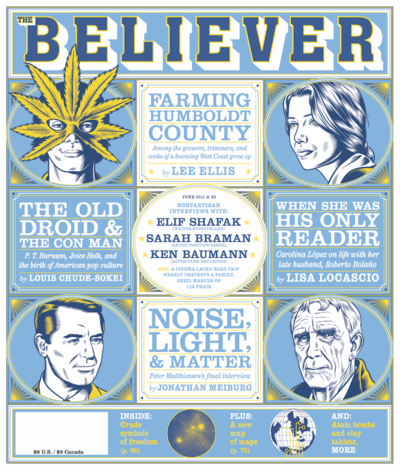 George Washington’s “Mammy” by Louis Chude-Sokei
P. T. Barnum alternately described one of his earliest sideshow characters, Joice Heth, as ancient and as less than human. The fact that his audiences believed either story says something troubling about America.

Sarah Braman interviewed by Ross Simonini
“The brain is good and there’s lots of stuff I need to use it for, but I’m not sure the studio is the best place for it.”

Road to Rapid City by Brian T. Edwards
A father builds an epic family road trip around American films that, it turns out, haven’t all aged particularly well.

Peter Matthiessen interviewed by Jonathan Meiburg In
An interview conducted shortly before his death, the author and explorer discusses Zen, nature, and nearly hitting the big time.

Elif Shafak interviewed by Kaya Genç
“There is a side of me that is mystical or irrational. It tells me that we are merely scribes, that we don’t own the stories we write.”

Ken Baumann interviewed by Sabra Embury
“I feel like human beings were never meant to have such extreme attention. Ecologically, this edifice of culture that we’ve constructed totally supports a way of life that’s asymmetrical to what nature has built so slowly and surely.”

Carolina López interviewed by Lisa Locascio
Robert Bolaño’s widow talks about their life together, his books, and his love of the computer game Civilization.