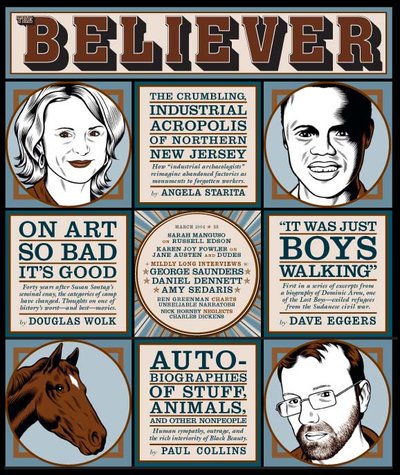 The Oldest available back issue of The Believer!

You and Your Dumb Friends
by Paul Collins
What we might glean from the autobiographies of animals and the memoirs of inanimate objects.

“It Was Just Boys Walking”
by Dave Eggers
An excerpt from a forthcoming biography of Dominic Arou, a young refugee from Sudan.

Jane and Me
by Karen Joy Fowler
Jane Austen may not have much in common with comic books or fairy tales, but she’s got even less in common with teen girls’ magazines.

Notes on Art So Bad It’s Good
by Douglas Wolk
The art we call SOBIG: earnest schlock that blurs the line between just good and just dreadful.

The Acropolis of Northern New Jersey
by Angela Starita
A short history of the development of mechanized architecture—and the industrial archeologists who want to save it.

FULL TEXT
Why the Reader of Good Prose Poems is Never Sad
by Sarah Manguso
This is not disorder: Russell Edson writes logically nonsensical, antiprosaic prose.

George Saunders
interviewed by Ben Marcus
The author of Pastoralia talks with Ben Marcus about West Nile Virus, the fear of realism, and the rising of the heart.

FULL TEXT
Amy Sedaris
interviewed by Eric Spitznagel
The writer/actor on social outcasts, fake meat products, and a hospitality show for those with extra-long legs.

Schema: A Comprehensive History of the Unreliable Narrator
by Ben Greenman


MORE FROM THE BELIEVER