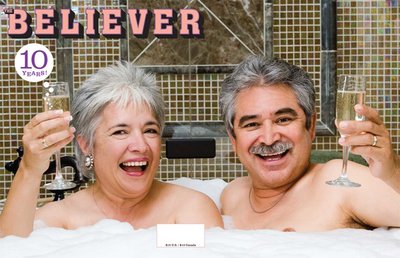 Letter to the Editors by Marc Herman
Ten years on, a reexamination of a piece from issue one

Noise-Canceling Headphones by Paul La Farge
A mole’s-eye view of the novel, its pleasures and inconveniences What the Swedes Read by Daniel Handler

The Anarchists Must Go by Justin Wadland
In the wake of a president’s assassination, a community newspaper with a circulation of seven hundred and a section focused largely on steamer schedules and tomato yields found itself defending the right to free speech while an angry mob formed a raiding party

The Believer Book Award Short List by The Editors

The Believer Poetry Award Short List by The Editors

November 24, 1963 by Susan Straight
What my brother left behind

Four Paintings by Raymond Pettibon, with text by Jonathan Lethem

Reviews
Nicholas Rombes on a ten-year-old film, Adriane Quinlan on a museum ten years in the making, Stephen Burt on a statesman of ten years ago, and Benjamin Weissman on writing gigs of ten years ago

Jeanette Winterson interviewed by Andrea Tetrick
“I was so angry and thought, I’m not playing the game, because I didn’t want to play the literary game. I wanted to write books, which is different.”

Joe Frank interviewed by Jonathan Goldstein
“Stop at nothing to get the best work that you can get. Betray, violate, cause enormous harm.”

Rev. James Lawson interviewed by Diane Lefer
“How can you claim to love God, who is invisible, if you hate the neighbor who you can see?”

Martha Plimpton interviewed by Kathryn Borel
“When you start worrying about how you are being perceived, your work loses integrity.”

“Theory of Relativity”: a new poem by Eric Weinstein