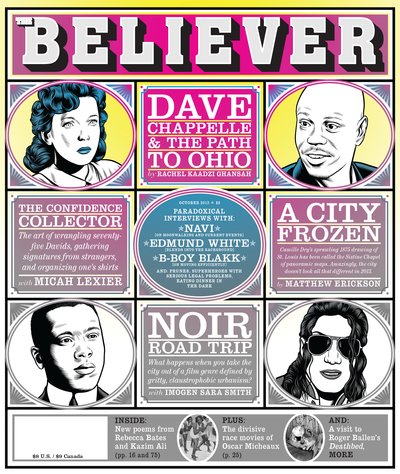 If He Hollers Let Him Go by Rachel Kaadzi Ghansah
A look at the political, personal, and familial reasons for Dave Chappelle’s return home to Yellow Springs, Ohio.

“A Pair of Interacting”: a new poem by Rebecca Bates

The Homesteader by Will Sloan
The life and films of “race movie” director Oscar Micheaux, a unique figure in cinema history who has been both lauded and dismissed.

Micah Lexier interviewed by Sheila Heti
The Toronto-based artist on order, confidence, and sending one’s values out into the world.

Navi interviewed by Noah Pisner
“I don’t want to end up like that Elvis cliché who just kind of busts out of his costumes and hasn’t got the figure or persona anymore.”

The Process by Caia Hagel
A conversation with photographer Roger Ballen about his image Deathbed.