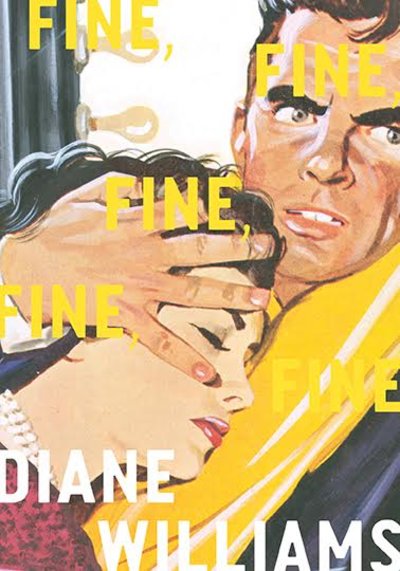 One of Vulture’s Best Books of 2016 (So Far).
A Publishers Weekly Book of the Week.
One of The Millions’ and Flavorwire’s most anticipated books of 2016.
One of Elle Magazine’s 3 Must-Read Titles for Your Book Club.

The very short stories of Diane Williams have been aptly called “folk tales that hammer like a nail gun,” and these forty new ones are sharper than ever. They are unsettling, yes, frequently revelatory, and more often than not downright funny.

Not a single moment here is what you might expect. While there is immense pleasure to be found in Williams’s spot-on observations about how we behave in our highest and lowest moments, the heart of the drama beats in the language of American short fiction’s grand master, whose originality, precision, and power bring the familiar into startling and enchanted relief.

Read an interview with Diane Williams in the LA Review of Books.

“In a story called “The Great Passion and Its Context,” one of Williams’ narrators stands on public transportation with an injured foot, anxiously echoing Markun: “What’s still to come?—a warm flat landscape?—a shallow swimming pool?—the complete ruin of her health?—her absolute devotion to anyone?” The only answer comes in the form of children singing a duet three rows ahead of her: “They offer their share of resistance to you name it!—in a remote and difficult key, and in poor taste artistically.” If you can hold onto some vestige of poignancy in the face of that ironic exclamation mark and deflating final clause, you’ve found your new favorite writer. Williams has been plumbing this territory for decades—she’s published eight books before this one—and her confidence with language is frankly unnerving. She makes it jump through hoops, and a reader had better be willing to follow.”
—The Chicago Tribune

“A taut collection of flash fictions that are often beautiful but impenetrable, structured like little riddles to unspool. While it is easy to compare Williams’s work to that of Lydia Davis, another expert writer of absurdist shorts, this collection stands in its own category as defiantly whimsical and weird… Williams creates stories that can be consumed in small bites. But she provides enough material in each to chew over for an entire meal.”
—The New York Times

“Her work is certainly odd, but it’s also poetic, passionate, and precisely crafted. Her strange voices linger in the mind. Part of the pleasure of reading Williams is you have no idea what’s coming next. Don’t fret. These marvelous stories do have a beginning, middle and an end—just not necessarily in that order.”
—The Los Angeles Times

“The whip-quick snapshots in Diane Williams’s Fine, Fine, Fine, Fine, Fine pack a sizable punch; to read is to tread unstable ground. Discomfitingly and devastatingly funny, Williams upends the mundane, the painful, and the unusual, resulting—much in the way an art teacher might ask her class to copy a photograph upside-down—in precision and clarity.”
—Elle

“I’m tempted to call Diane Williams’s stories ‘little gems,’ but really they have no equivalent among jewels I’m familiar with. I’ve never tried acupuncture, but I wonder if the experience is like reading her prose. It can’t be as much fun.”
—Vulture’s Best Books of 2016 (So Far)

“[T]he hysterics in Fine, Fine, Fine, Fine, Fine have already fallen apart, and author Diane Williams catalogs their damage with avant-garde zeal… [Williams’s] characters speak with such astonishing curiosity and independence that they stake out a space for themselves—where, fully alive and alive in language, they finally become free.”
—O, The Oprah Magazine

“If you’re prone to judging books by their covers, Fine, Fine, Fine, Fine, Fine is likely as irresistible as what lies inside: Williams’ super-short stories are “folk tales that hammer like a nail gun.” Intrigued? … Well, you should be: Fine x 5 is out of McSweeney’s, which does everything just a liiiittle bit different in the best possible way.”
—The Week’s 28 Books to Read in 2016

“Williams’ stories are like summaries of “Leave It to Beaver” episodes written by an alien: that is to say, supercollided collages of domestic life that somehow become stranger the more you read them.”
—SFGate Recommended Reading

“[Williams’] details are always precise, and her masterful prose distills her fictional worlds down to bright, brief moments… we can feel ‘the mysteries of daily life’ pulsing through Williams’ keenly observed, contemplative tales.”
—San Francisco Chronicle

“Perhaps the finest collection of 40 stories since Donald Barthelme, Williams lights this one up with tremendous humor and wit.”
—Flavorwire

“A Diane Williams story resembles a story as it exists in the mind at the moment it reifies from abstract brain activity into concrete language. Her stories—events, ‘slices of life,’ human things—are free from the interlocutor of literary convention. They are just being, and they are about just being.”
—Electric Literature

“Centrifugal stories, supershort and superpithy, by avant-gardist Williams. In Williams’ stories, a non sequitur has the same weight as an ordinary logical proposition, as if to suggest that either we are very illogical creatures indeed or that no one is really listening to anyone else anyway… Charged with meaning, every word carrying more than its weight, this is a series of provocations inviting us to look at the world a little differently from before.”
—Kirkus

“…the best of the [flash fiction] bunch, in my estimation, is Diane Williams…the ways in which these stories, rarely longer than two pages, upend the alleged normalcy of the bourgeoisie is particularly sharp. While not exactly a work of parody, a sly sense of humour ripples throughout the book, and, like any good joke, many of these pieces conclude with unexpected twists of language and imagery.”
—The Globe and Mail

“These intensely taut, fraught little tales [are] refreshing. They are surreal, but not Kafkaesque, or even Murakami-like. People do not perform impossible activities, experience bizarre events or even say absurd things, so much as they inhabit little worlds of highly condensed experience… They pace through plots like expertly crafted androids plagued by software glitches.”
—Las Vegas Weekly

“Nobody comes close to the American short story writer Diane Williams, perhaps because they’re too scared. Her gifts are curious and disturbing, yet paraded with exquisite calm. Her eighth collection in nearly three decades, Fine, Fine, Fine, Fine, Fine, arrived this month to prove that the uncanny is alive and well and living in her head… Her stories climb inside your mind and ask, in the words of one narrator, ‘Whose house is this?’”
—Frieze

“Williams’s exquisitely deadpan method can result in a story that evidently means something devastating but is so obliquely sketched that the moral is left tantalisingly out of reach.”
—The Guardian

“Her stories may be short, but their mysterious centers are nearly unreachable—and reaching them is not always part of the exercise. As Williams once said,“How unlifelike to understand perfectly.” Instead of reinforcing normal human habits of perception, her fiction exists to subvert them.”
—Numéro Cinq

“Williams renders every single word like a prism of implication, and she stretches the space between sentences as wide as chapter breaks, while the sentences themselves somehow read like stand-alone stories. The density of her writing warrants a closer reading than most fiction because it also reads like superb poetry, just casual and fluid and lilting between verse and improvised speech.”
—Zyzzyva

“The death of metaphors, the pruning or framing of ridiculous language: much of this marks the fiction of Diane Williams, one of our most persistent side-eyers of realism over the last twenty-five years. This [is] to say that where Balzac or Dickens—those paradigmatic authors of 21st century TV realism—go deep, Williams instead lingers on surfaces. Where they work to build houses for the reader to enter into and reside in, Williams works alongside them, constructing an edifice that estranges the neighborhood, a home that only looks familiar insofar as it has one window and a doorknob… This also proves why Jonathan Franzen, the godhead of televisual prose, describes Williams’ fiction like this: ‘Her fiction makes very familiar things very, very weird.’ He can’t stop himself from transcribing her work into comfortable, realist terms, but when he can’t pay the word ‘weird’ a high enough wage, he has to bring in ‘very’ twice to finish the job.”
—Flavorwire

“Williams’s short stories operate according to the principles of Viktor Shklovsky’s ostranenie: making strange in order to reveal the ordinary anew. They are dense and dazzling oddities with an ear for patois and steeped deeply in the uncanny. Darkness and desire and despair and longing and schadenfreude and judgment roil just below the surface of seemingly pleasant exchanges, and, in their telling, subvert the reader’s expectations of just how a story unfolds.”
—The Millions

“Forty very brief stories strike with precision… Encompassing interactions both vast and intimate… Williams’s avant-garde stories explore the faulty power of the mind as well as the delusions we cling to to keep moving forward.”
—Booklist

“To say that Williams is a poet who happens to write prose won’t quite do. Although there are affinities with postwar American poetry, Williams is working consciously… against the grain of the conventions of fiction. Her stories tend to veer away from any expectations put forward in the first few lines. There are apparent disjunctions, jarring juxtapositions, and seeming non sequiturs. Language often seems to be calling attention to itself and away from the narrative flow. But these turns often resolve into texts with their own sort of coherence—of a sort that’s neither vacuum-sealed nor merely morally ambiguous in the ways we’ve been trained to read fiction. No epiphanies or plots, but vectors of life.”
—Vulture

“She is one of the very few contemporary prose writers who seem to be doing something independent, energetic, heartfelt.”
—Lydia Davis

“The uncanny has met its ideal delivery system: the stories of Diane Williams.”
—Ben Marcus

“Let’s hear it for the magnificent Diane Williams, one of the wittiest and most exacting writers of our time. Her fictions are fervid endorsements of terrible, joyous life. But that’s not quite right, because like all great literature, they are life. Well, you figure it out.”
—Sam Lipsyte

“One of America’s most exciting violators of habit.”
—Los Angeles Times

“However comfortable you may be with the avant-garde, you’re probably not too cool to admit you wouldn’t know a modern-day “Ulysses” if it bit you. Diane Williams’s new experimental work attempts something far more rude.”
—The New York Times

“Williams’s book is populated with heartbreak, affairs, and death, and however mystifying passages can be, the author has a sly humor that cuts through everything else. Equal parts satisfying, mysterious, thoughtful, and quick.”
—Publishers Weekly

“‘Vicky Swanky’ is Williams at her best, shaking us awake again to the persistent strangeness of human life.”
—Jenny Hendrix, The Boston Globe

“The shorts in Diane Williams’s Vicky Swanky Is a Beauty emit an unsettling brilliance, becoming, on repeated readings, even stranger and more revelatory.”
—Vanity Fair

“True to her reputation, these are refined stories possessing many hallmarks of [Diane Williams’s] past work: sharp dialogue fraught with tension, highly agile shifts in perspective, acerbic humour, and the ability to surprise without reducing the form too often to a gimmick or a stunt.”
—The National