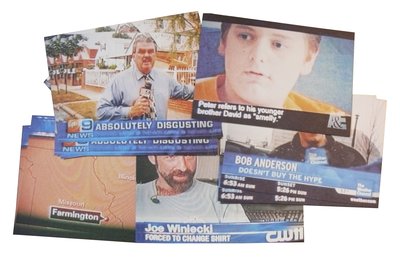 This limited-edition postcard set celebrates some of Mike Sacks's all-time-greatest photographs of his television screen, as seen in the January 2008 issue of The Believer magazine. You'll get twenty cards in all: four each of five different photos.

BONUS: Order now and receive four copies of a top-secret sixth photograph. You'll be hard pressed to find a better deal on twenty-four TV-photo postcards anywhere else on the internet.