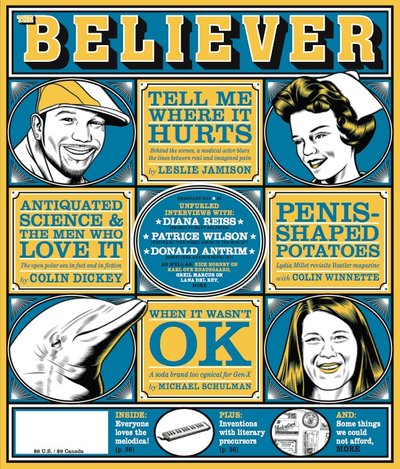 The Empathy Exams by Leslie Jamison
Acting out pain until that pain becomes real, for $13.50 an hour.

Everything Is Going to Be OK, Michael Schulman
In 1994, the Coca-Cola Company created an apathetic soda brand to win the hearts of Generation X. It didn’t work.

On the Open Polar Sea by Colin Dickey
Near the North Pole, discredited science makes for great science fiction.

Lydia Millet interviewed by Colin Winnette
The novelist discusses her early-’90s stint working as a copy editor” at Hustler magazine.

Diana Reiss interviewed by Meehan Crist
The animal-cognition researcher explains explains how dolphins are a little like human children and a lot like aliens.

Donald Antrim interviewed by Drew Smith
“I mainly feel that I’m not up to the job, but that I’m going to go ahead and do it. I’m quite serious when I say that.”

Patrice Wilson interviewed by John Semley
The songwriter/producer/viral-video mastermind on the haters and on rhyming broccoli with Monopoly.