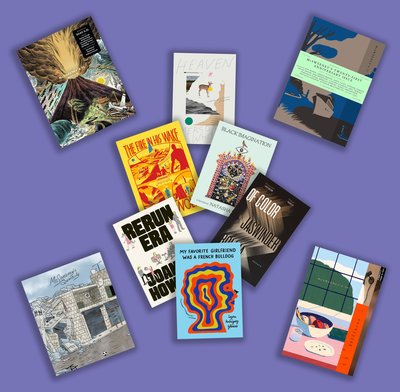 Life is too short to worry about not having enough reading material. That’s why we’ve decided to combine two of our most popular longstanding subscriptions into one super-sized combo, bringing you no less than ten McSweeney’s publications—and one special tote—straight to your mailbox. You’ll get four issues of our ever-changing, always boundary-pushing National Magazine Award-winning literary journal McSweeney’s Quarterly Concern, PLUS the next six titles from our books division, sent prior to or upon publication and bundled with special letters of introduction from the authors themselves. On their own, these books and quarterlies can retail anywhere from $16–$30, so this is truly a deal worth writing home about. And, like the cheesiest of infomercials, that’s not all! Combo subscribers will also be sent a beautiful green McSweeney’s tote immediately upon purchase.

Take a look at what you’ll have coming your way

McSweeney’s Issue 60
McSweeney’s 60 features eight original stories, each accompanied—a first, for us—by cinematic, full-color photography from award-winning photographer Holly Andres. There are tales of healing powers discovered in a neighborhood market and retiring baseball stars, of ill-fated father-daughter float-plane trips and a romance with the ghost of an old Hollywood heartthrob. A not-to-be-missed, oversized issue, this is one you’ll want to keep preserved in a temperature-controlled room for generations to come.

The Fire in His Wake
The Fire in His Wake, Spencer Wolff’s exuberant debut novel, tells the story of two men swept up in refugee crises of the twenty-first century: Simon, a young employee at the UNHCR in Morocco, and Arès, a Congolese locksmith left for dead in the wake of ethnic violence.

“A dazzling first novel about a Congolese refugee… The Fire in His Wake addresses pressing themes of our times—migration, human rights, and the refugee crisis. Splendidly ambitious both in narrative scope and formal innovation….Wolff has managed, with enviable dexterity and sensitivity, to tell the story of an African without reducing his humanity or pretending to comprehend or sublimate his suffering.”
—Nyuol Lueth Tong, editor-in-chief of the Bare Life Review, a journal of immigrant and refugee literature

McSweeney’s 61
McSweeney’s returns with our 61 issue, with a back to basics collection of the best literary material we can find. Featuring letters by Maria Bamford, Sally Wen Mao, and Melissa Febos; brand-new stories by Brandon Hobson and Salvador Plascencia; three separate full-color art features from Gabrielle Bell and others; five pieces of posthumously translated microfiction by Argentine author Hebe Uhart; and so much more. All bound together in a beautiful hardcover featuring a woodblock print cover by the brilliant Sophy Hollington. You won’t be able to tear yourself away.

My Favorite Girlfriend Was a French Bulldog
My Favorite Girlfriend was a French Bulldog is a novel told in fifteen stories, linked by the same protagonist, our narrator, who–in her own voice and channeling the voices of others–creates an unsparing, multigenerational portrait of her native Cuba. Though she feels suffocated by the island and decides to leave, hers is not just a political novel–nor just a queer novel, an immigrant novel, a feminist novel–but a deeply existential one, in which mortality, corporeality, bureaucracy, emotional and physical violence, and the American Dream define the long journey of our narrator and her beloved pet dog, who gives the book both its title and its unforgettable ending. In its daring style and structure–both playful and profound, youthful and mature - and its frank discussion of political and sexual identity, My Favorite Girlfriend was a French Bulldog marks the emergence of an original and essential new voice.

And then?
An indispensable collection of writing and art and comics and letters (and more!) from the most exciting Queer voices working today, guest edited by Patty Yumi Cottrell (Issue 62); an innovative issue exploring the relationship between print and audio made in partnership with Radiotopia; a new work of nonfiction from Italian master Alessandro Baricco that looks at technology, games, and how we live now; lost classics of the African diaspora, and more collections, novels, and works of nonfiction of the kind of cutting-edge literary content readers of McSweeney’s Quarterly Concern have come to expect for over two decades.

IMPORTANT LOGISTICAL INFORMATION: All subscriptions placed before July 1st will begin with The Fire in His Wake, and McSweeney’s 60. All subscriptions to McSweeney’s Quarterly automatically renew after four issues, at a reduced price of $75, while subscriptions to the McSweeney’s Book Release Club renew after six issues at a price of $95. Before the start of each four-issue Quarterly renewal and six-issue Book Release Club renewal, and in the case of any future rate changes, we will notify you via email. If you’d like to cancel either subscription at any time prior to its auto-renewal, you can log in to your account and adjust your subscription settings. Or, send an email to custservice@mcsweeneys.net with the subject lines ”End Quarterly Renew”, ”End BRC Renew”, or ”End Combo Renew” depending on your desires, or call (415) 642-5609. Refunds will be accepted only up until the first issue of your renewal is shipped. If you’d like to give the Quarterly Concern as a one-time gift, purchase a gift subscription here. Any subscription purchased with the “gift” option marked at checkout will not be enrolled in autorenew.