THE CAPTAIN AND THE GLORY (E-BOOK) 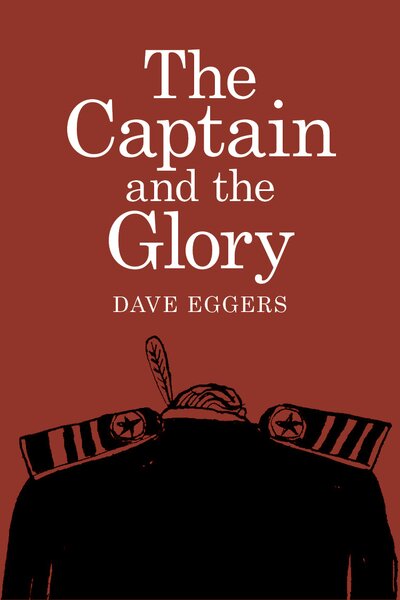 Now Available for FREE: The Captain and the Glory by Dave Eggers

Now that it’s over, you can look back at the last four years, allegorical-style, and maybe even laugh. When the captain of a venerable ship retires, its thousands of passengers have a choice between installing a new captain who knows the ship, its mechanics, and — crucially — how to sail, and choosing an imbecile who doesn’t like boats and can’t swim. Needless to say, they choose the imbecile. More than a recap of the Trump years, this biting satirical novel is a timeless allegory for the ludicrous and self-defeating way too many societies see democracy and governing. McSweeney’s is proud to be issuing the ebook edition of The Captain and the Glory at no cost for a limited time.

Praise for The Captain and the Glory

“A short parable for our times that is 30 percent Veep, 30 percent Voltaire, and the rest flavored by Margaret Atwood, Jonathan Swift, Percival Everett, and Salman Rushdie.”
—Los Angeles Review of Books

“A very short, allegorical novella, but capacious enough for all of your emotions about this period in history, from amusement to grief to irony to horror… As good as you can imagine, and ultimately, almost a hallucination of hope.”
—Virginia Heffernan, Slate’s Trumpcast

“The wildest and funniest satire of our president I’ve read so far… one of our great political novelists.”
—KCRW’s Best Books of 2019

“In Dave Eggers’s witty fable The Captain and the Glory, the fictional narcissist who takes command of a ship believes ‘all books are written by people who would not get erections.’”
—The Independent (UK)

“Seriously, tell any of the best novelists in America to satirize an obese septuagenarian who’s addicted to Sudafed and paid more money than most households bring in in a year to pay off a porn star with whom he slept while his wife was pregnant about a decade before he became the most powerful man in the country. They’d probably avoid the topic because it’s too insane to touch… Dave Eggers is one of the best novelists in America right now, though, and he likes to get weird with his stories, so here we are. The Captain and the Glory handles the absurdity of Trump more deftly than some other very funny people have… Eggers presents these events matter-of-factly. He doesn’t normalize them, but introduces them, already normalized within the world he’s constructed. It’s an interesting world, but it’s not that different from ours—a testament to how far we’ve strayed from normalcy.”
—BookTrib

“Utterly hysterical. This book gets it exactly right — the tone, the form, the kind of naive narrative that implies that all this is perfectly normal. I laughed out loud so frequently I was amazed, because I’m not that easy to make laugh out loud. Bravo.”
—Eric Idle

“A funny, macabre, and inspired modern fable about a boat and its captain. If there is any further metaphor involved, though, it is totally lost on me.”
—B. J. Novak

“A shattering, hilarious, spellbinding siren call from the deck of one of our greatest storytellers and prophets.”
—Eve Ensler

“This dark fable is a piercing look at the foibles of our time.”
—Admiral James Stavridis USN, Supreme Allied Commander at NATO (2009-2013)

“It is difficult these days to portray the sheer, numbing, terrifying, unprecedented strangeness of what is happening in contemporary maritime life. One wants to say it mirrors politics? But truly no metaphor quite captures the sense of peril, nausea, uncertainty, and constant upheaval we feel on angry seas while under bad command. The worry is that you stop trying to describe it. That is why Dave Eggers’s novel is such an accomplishment: it reminds us of how bad it is right now, how we have a moral obligation to keep noticing it, and not get quietly used to it. I’m talking about boat life. Nothing else. Nothing else.”
—John Hodgman

“There is a peculiar kind of cathartic feeling that comes from desperate, worried laughter. This kept happening to me while reading this book. The Captain and the Glory is completely absurd and true. It is as funny as it is scarily reflective of our times and current president. Eggers has given us an essential American satire, a depiction of this administration that doesn’t simply deny it as an abomination—which it is—but carries us through an illustration of a parallel imaginary world that delights and defames and is just so good and funny.”
—Tommy Orange

“A balm for our time. Eases a bit of the fear. It’s brilliant and iconic and straddles the lines of humor and timelessness and indispensability. Get it. We need it.”
—Lisa Taddeo

“If the normal daily diet of news makes you think that Lord Byron was right – that you should laugh so you do not weep — then let Dave Eggers help you do just that.”
—George F. Will