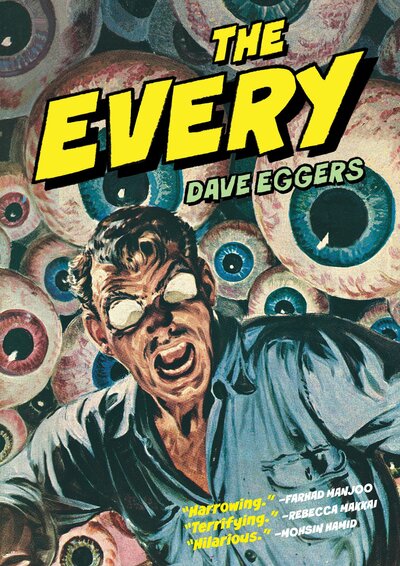 The hardcover edition of The Every will be available in perpetuity (in 2021 and 2022, and 2039…) in a dizzying, ever-expanding, and entirely randomized array of cover variations exclusively through independent bookstores and here at McSweeney’s, the book’s independent, nonprofit publisher.

When the world’s largest search engine/social media company, the Circle, merges with the planet’s dominant e-commerce site, it creates the richest and most dangerous—and, oddly enough, most beloved—monopoly ever known: the Every.

The Every delves deeper into the questions posed by The Circle and the world it introduced. It also stands perfectly on its own as an independent work, as appealing for brand-new readers as for people who’ve been waiting eight years to find out what happens next.

The Every is the fourth selection for our brand-new Virtual Book Club. We’ll be meeting online to discuss Wednesday, October 27, at 5:30 p.m. PT. All are welcome to join. In addition, all New Release Subscriptions placed by November 1 will begin with The Every.

Praise for The Every

“A true satire, one with sharp teeth and a wickedly keen eye for both the farce and tragedy of our digitized world. Eggers’s talent for absurdity and linguistic playfulness take the edge off the truly terrifying future presented here—one that is all too plausible. The Every is a wild ride; in truth, it scared the living daylights out of me.”
—Haley Patail, bookseller at the Writer’s Block

“Dave Eggers’s The Every is directly contending with and addressing the philosophical, social, and political issues of our present informational overload and the extant, hyper-driven engines of epistemic drift that have created it. These are issues that seem impossible to explain, let alone satirize or fictionalize. Yet in expanding on the horrors of looming corporatocracy explored in The Circle, Eggers deftly wraps his arms around them all. As Delaney Wells immerses herself into the world-eating omni-corporation the Every as a would-be saboteur, we are reading a brilliant, rollicking literary thriller. But as The Every reaches its harrowing climax, we are directly confronting a question that now daily weighs heavier than ever before: is another world possible?”
—John Ganiard, bookseller at Literati Bookstore

“Captivating. A deeply suspenseful and intelligent novel that speaks to the most important issues we’re all facing. Eggers zeroes in on where we are and where we are headed with dark humor, suspense and an uncanny empathy. The Every is a novel that could change us.”
—Greg Danz, bookseller at Zandbroz Variety

“Once a decade a book like The Every advances the frontier of literary excellence: a book that reflects our culture. Predicts our future. Worm-holes into our subconscious. Delivers artful and complex characters, metaphor, ideas, narrative. Provides percussive movements of levity, gravity, grace, suspense, hilarity.”
—Kerri Arsenault, The Boston Globe

“A darkly hilarious narrative that doesn’t just hit close to home. It burns the home down and then coldly assassinates all insurance adjusters who arrive on the scene to offer redemption.”
—Eric Mack, CNet

“A prescient—and hilarious—meditation on the rise of tech giants and how our blind trust in them could ultimately be our demise.”
—Harper’s Bazaar

“(A) great-grandchild of Zamyatin’s We, but now the ‘perfect society’ is Silicon Valley. Be careful what you wish for!”
—Margaret Atwood, via Twitter

“Hilarious and horrifying and idealistic. An unusual combination in a novel, or in anything else, really, but here the necessary result of a powerful writer taking on much of what matters most to our future.”
—Mohsin Hamid, author of Exit West

“Unforgettable. With brilliant humor and enormous suspense, The Every examines how technology is indelibly redefining what it means to be human, and how it already has.”
—Van Jones, CNN contributor and author of Beyond the Messy Truth

“At once sharply satirical and big-hearted, darkly comic and profoundly serious, The Every is a novel for our time.”
—Elizabeth Kolbert, New Yorker staff writer and author of Under a White Sky

“Many will say The Every offers a prophecy of tech-abetted dystopia, but that’s both too dour and too hopeful a way to describe Dave Eggers’s remarkable sequel to The Circle. Too dour because you’ll be hard pressed to find a more hysterical account of digital madness. Yet too hopeful because the true horror here is how closely Eggers hews to our daily reality of tech-dependence, and how often The Every feels more like documentary than dystopia—a hilarious, harrowing look not at a disturbing future but an inescapable present.”
—Farhad Manjoo, New York Times opinion columnist and author of True Enough: Learning to Live in a Post-Fact Society

“I don’t know what’s more frightening: Dave Eggers’s relentlessly inventive worldbuilding of a pseudo-virtuous surveillance economy run monopolistically amok, or that his near-future dystopian satire may be a more naturalistic rendering of our present than we’d like to admit. Novels like The Every—equal parts comic entertainment and ominous explication—are one of our best means of resisting the dehumanizing seductions all around us and imagining a better world.”
—Teddy Wayne, author of Apartment

“Have you seen Notorious? That intense and glorious Hitchcock? Dave Eggers had me horrified and rapt like that with The Every. Written with wit and candor and a weighty kind of brilliance, I watched this story unfold from the line ‘There were no good choices.’ Time seemed to jerk under the pressure of this sentence, holding our current moment of monopoly up to the light. This is quite the fucking story. I wanted more of The Every in an urgent way when it ended—goddamn it’s good. Honestly, it’s essential.”
—Emerson Whitney, author of Heaven

“For a book that is often hilarious, and always a page-turner, this is an awfully uncomfortable read, and it stays with you afterward, lingering and surfacing every time you brush up against the technology in your life.”
—Cory Doctorow, author of Attack Surface, Walkaway, and The Shakedown

“True to its title, The Every manages to be all the things at once: funny and frightening; engaging and disturbing; true and uncanny. It pulls off the impossible trick of depicting a future that’s already now. Above all, it’s a propulsive story I couldn’t put down, and it stayed with me long after I read it.”
—Jennifer Traig, author of Devil in the Details: Scenes from an Obsessive Girlhood

“The Every is wonderful, profound, tragic, dystopian, scary, inspiring, and also extremely funny.”
—Andrew Keen, author of How to Fix the Future

“Eggers proposes an uncanny world, on the border between the impossible-to-imagine and the already-in-play. Every reader is implicated. We are all members of that passive army willing to trade freedom for convenience. As digital culture blossomed, people wondered if machines could be made to think like people. The more compelling question is the one Eggers poses in The Every: Are people content to become machines?”
—Sherry Turkle, author of The Empathy Diaries

“Launching and exploring a dazzling array of ideas, The Every is a tremendous feat of narration. Propulsive, hilarious, driven by big characters and big ideas, it also feels like the ultimate tale of our tech-driven times.”
—John Freeman, author of How to Read a Novelist

“If Mae Holland introduced readers to the credulity of evil, Delaney Wells, protagonist of The Every, shows us instead the possibility—and limits—of resistance in our age of techno-utopianism. Will she Yes-Man her way to revolution or apocalypse? Eggers’s darkly resonant and blisteringly funny new opus is a satire about the limits of irony. It asks: Are we building a reprehensible world from ideas that seem, on the surface, virtuous?”
—Virginia Eubanks, author of Automating Inequality

“The Every belongs in the pantheon of dystopias. Eggers has conjured a tech-shrouded future that’s both exaggerated and troublingly believable. Through Eggers’s lens, it’s not impossible to imagine a world in which we’re under constant surveillance, forced to return to screens and wearables every few minutes, and in which privacy and individuality are almost entirely eradicated. Eggers’s characteristic attention to detail and humor are on full display, which makes it impossible not to enjoy reading The Every despite the darkness of his vision.”
—Adam Alter, author of Irresistible and professor of Marketing and Psychology, NYU Stern School of Business

“Dave Eggers is our George Orwell for the digital age. The Every is a brilliant exploration of the American obsession with efficiency that will also make you laugh until you cry. With a unique eye for the absurd, Eggers ultimately illuminates how human beings cannot be reduced to algorithms unless we allow ourselves to be. Dazzling and essential.”
—Allison Stanger, Leng Professor of International Politics and Economics, Middlebury College; External Professor, Santa Fe Institute

“In this thoroughly entertaining new book, Dave Eggers takes every opportunity to work out the worst possible scenario of the worst possible ideas that the world of tech has offered or might offer, both at the personal and cultural levels. If there’s a half-baked bad predictive model floating around the Silicon Valley ether, prepare to see it fully baked and served with a heaping side of shame. And it’s funny, too!”
—Cathy O’Neil, author of Weapons of Math Destruction: How Big Data Increases Inequality and Threatens Democracy

Read more about the publication of The Every in The New York Times.

Are you an indie bookstore looking to carry The Every? The book is available exclusively through our distributors at Baker and Taylor Publisher Services. Email contact@mcsweeneys.net, subject line “The Every Ordering” for more information and to be connected to your local sales rep.