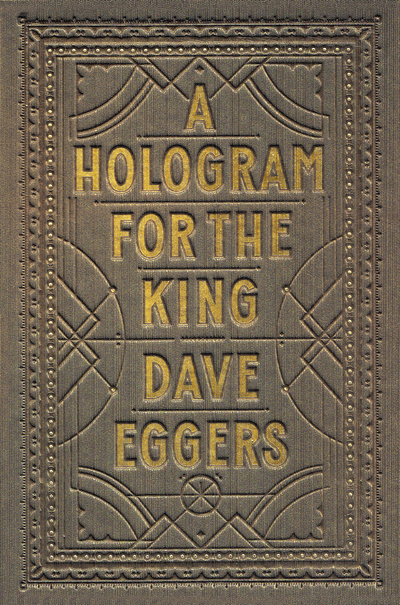 One of the New York Times Book Review’s Ten Best Books of 2012!

“Mr. Eggers uses a new, pared down, Hemingwayesque voice to recount his story… he demonstrates in Hologram that he is master of this more old-fashioned approach as much as he was a pioneering innovator with A Heartbreaking Work of Staggering Genius….[This] sad-funny-dreamlike story unfolds to become an allegory about the frustrations of middle-class America, about the woes unemployed workers and sidelined entrepreneurs have experienced in a newly globalized world in which jobs are being outsourced abroad…. A comic but deeply affecting tale about one man’s travails that also provides a bright, digital snapshot of our times.”
—Michiko Kakutani, The New York Times

“Wonderful… . [A Hologram for the King] is Death of a Salesman set in post-industrial America.”
—Michael Silverblatt, host of KCRW’s Bookworm

“Dave Eggers is a prince among men when it comes to writing deeply felt, socially conscious books that meld reportage with fiction. While A Hologram for the King is fiction…it’s a strike against the current state of global economic injustice.”
—Elissa Schappell, VanityFair.com

“Alan feels like Eggers’s most fully-realized character to date … A sad and beautiful story.”
—John Freeman, The Boston Globe

“A Hologram for the King is without doubt [Eggers’] best novel; it is also among his best books in any form.”
—Richard Warnica, Macleans