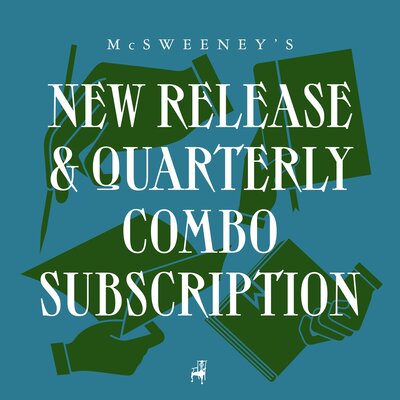 Life is too short to worry about not having enough reading material. That’s why we’ve decided to combine two of our most popular long-standing subscriptions into one super-sized combo, bringing you no fewer than ten McSweeney’s publications—and one special tote—straight to your mailbox. You’ll get four issues of our ever-changing, always boundary-pushing, National Magazine Award-winning literary journal McSweeney’s Quarterly Concern, PLUS the next six titles from our books division, sent prior to or upon publication and bundled with special letters of introduction from the authors themselves. On their own, these books and quarterlies can retail anywhere from $16 to $30, so this is truly a deal worth writing home about. And, like the cheesiest of infomercials, that’s not all! Combo subscribers will also be sent a beautiful green McSweeney’s tote immediately upon purchase.

Griefstrike! The Ultimate Guide to Mourning by Jason Roeder
When it comes to grief, there’s no room for second best. Sure, there are other guidebooks aimed at helping you cope with the emotional and practical challenges of losing a loved one. None, however, have been written by a comedy writer whose “therapeutic training” went no further than an undergraduate degree in psychology, and who lived through this terrible experience and emerged intact enough to write a bunch of jokes about it. What The Daily Show’s America (The Book) was to civics and The Onion’s Our Dumb Century was to the history of the twentieth century, Jason Roeder’s hilarious (and often moving) Griefstrike! is to death, mourning, and somehow getting on with your life.

And then?
Keep an eye out in 2022 for three more thrilling and innovative collections of the kind of cutting-edge literary content readers of McSweeney’s Quarterly Concern have come to expect for over two decades. Plus, unforgettable works of fiction and nonfiction from McSweeney’s Publishing.

“McSweeney’s is so much more than a magazine; it’s a vital part of our culture.”
—Geoff Dyer, McSweeney’s contributor and author of Jeff in Venice, Death in Varanasi and Otherwise Known as the Human Condition

“Some magazines are comfort reads. We turn to them because we can almost predict, issue to issue, what and even who will appear in them. But others, like McSweeney’s, are challenge reads. They’re feverishly inventive, discomfortingly surprising, and therefore among the best reminders that we are actually alive. I love shouting at McSweeney’s, laughing with it, and rolling my eyes at myself while the magazine reads me like a deceptively perceptive carnival psychic.”
—John D’Agata, author of Halls of Fame and About a Mountain

“I’m incredibly grateful for the existence of McSweeney’s. Its embrace of world literature is completely unique, lucid, knowing, and indispensable.”
—Francisco Goldman, McSweeney’s contributor and acclaimed author of The Interior Circuit: A Mexico City Chronicle and The Art of Political Murder: Who Killed the Bishop?

IMPORTANT LOGISTICAL INFORMATION: All subscriptions placed before December 1 will begin with both McSweeney’s 68 and McSweeney’s 69, and The Splendid Ticket. All subscriptions to McSweeney’s Quarterly automatically renew after four issues, at a reduced price of $75, while the McSweeney’s New Release Subscription renews after six issues at a price of $95. In the event of any future rate changes, we will notify you via email. If you’d like to cancel either subscription at any time prior to its auto-renewal, you can log in to your account and adjust your subscription settings. Or send an email to custservice@mcsweeneys.net with the subject lines “End Quarterly Renew,” “End New Release Renew,” or “End Combo Renew” depending on your desires. Refunds will be accepted only up until the first issue of your renewal is shipped. If you’d like to give the Quarterly Concern as a one-time gift, purchase a gift subscription here. Any subscription purchased with the “gift” option marked at checkout will not be enrolled in autorenew.