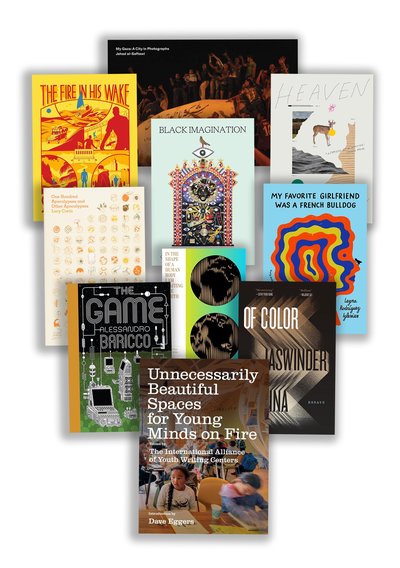 Somehow we’ve found ourselves at the end of 2020, a year none of us will ever forget. To celebrate the occasion, we’ve put together a deeply ambitious bundle, featuring every non-children’s book we put out in this chaotic, at times seemingly never-ending year. Also included here are two much asked for classics we were finally able to put back into circulation this year and that we can’t wait to get into your hands.

In such an unique, difficult, nonstop history-making year, we want to make sure these books and authors all get the attention they deserve, and that these books find their way to the readers who would love them most. Bring home this limited-edition bundle and catch up with some of our favorite work we’ve ever published.

An expansive examination of what makes us up, Heaven wonders what role our childhood plays in who we are. Can we escape the discussion of causality? Is the story of our body just ours? With extraordinary emotional force, Whitney sways between theory and memory in order to explore these brazen questions and write this unforgettable book.

“Melodic and engagingly written, Heaven will enrapture anyone who loves reading for beauty and intellectual challenge at once.”
—Literary Hub

Every kid in the world needs a safe, welcoming, and even weird place to write. That’s the theory behind 826 Valencia, a writing and tutoring center started in 2002. That center, with a pirate-themed storefront, inspired similar centers around the world, from New York to Melbourne.

Across 280 pages and hundreds of beautiful full-color photos, this lavish, oversized book takes you behind the scenes of how these centers started, in the hopes of inspiring more communities, schools, and libraries around the world to build their own centers for young writers. Unnecessarily Beautiful Spaces for Young Minds on Fire is a joyous and wildly creative book, filled with stunning photos of the world’s most welcoming and wild spaces for young minds.

In his debut essay collection, award-winning poet Jaswinder Bolina meditates on “how race,” as he puts it, “becomes metaphysical”: the cumulative toll of the microaggressions and macro-pressures lurking in the academic market, on the literary circuit, in the dating pool, and on the sidewalks of any given U.S. city. Training a keenly thoughtful lens on questions that are never fully abstract―about immigration and assimilation and class, about the political utility of art, about what it means to belong to a language and a nation that brand you as other―Of Color is a bold, expansive, and finally optimistic diagnosis of present-day America.

The Fire in His Wake

In search of a better future, Arès embarks on an epic journey across northern Africa with Europe as his goal. He reaches Rabat, Morocco, where he joins a desperate community of exiles fighting for survival in a hostile land. While Arès risks everything to make it to Spain, Simon gradually awakens to a subterranean world of violence that threatens his comfortable expat life and fledgling romance with a Moroccan singer. Part colorful portrait of life in the Maghreb, part astonishing tale of hope and perseverance, The Fire in His Wake carries the reader from the inner sanctums of the UN to the hazardous realities faced by the refugees in the streets and on their risky crossings to Europe.

My Gaza: a City in Photographs

My Gaza offers a startling perspective on contemporary Gaza. Photographer Jehad al-Saftawi documents his life there up until his escape, in 2016. His eye is drawn to moments of humanity and tenderness that redefine this place beyond propaganda, beyond prevailing narratives. Through vivid images and captions—a gun to the head, an interrogation, a family in strife—al-Saftawi exposes a situation that cannot withstand further escalation.

Urgent and resolute, My Gaza is the first book of its kind, presenting photos of present-day Gaza by a Gazan journalist.

“This is an outstanding book. These gorgeous photos force us to look, to direct our unflinching gaze at a subject most of us usually ignore. They are both microscopic and universal in scope, beautifully poignant. Gaza is the land of two million prisoners. Jehad al-Saftawi is a wonderful guide into its heart.”
—Rabih Alameddine

My Favorite Girlfriend Was a French Bulldog

Listed as a featured top book by Publisher’s Weekly, Chicago Review of Books, and Ms Magazine.

“(A) boundary-breaking work… at once wild, compassionate, and challenging… precise and correct.”
—ZYZZYVA

The Game: a Digital Turning Point

Fourteen years after the publication of his cult classic I Barbari, Alessandro Baricco (author of Emmaus and Mr. Gwyn) returns in The Game to the topic of change, in a journey that maps out the transformations that the digital revolution has wrought upon the landscape of human experience. From Space Invaders to the PlayStation, from Windows 95 to the conundrum of artificial intelligence, Baricco traces the trajectory of a revolution in the way we think, feel, and communicate—and seeks to discover what it might actually mean for our future.

“Are our Big Tech overlords rewiring our brains? Do they know precisely how, or what the end result will be? Who can guide us through this territory with the appropriate mixture of slyness and sure-footedness, delight and terror, with subtle and jarring insights arriving at the rate of at least one per paragraph? The answers, respectively, are absolutely, absolutely not, and Alessandro Baricco.”
—Andrew Marantz of The New Yorker

“With The Game Baricco is betting on the success of the human being in the 21st century. His theses are brilliant and very daring. They deserve an open discussion.”
—Nicola Lagioia, La Repubblica

Lucy Corin’s dazzling collection is powered by one hundred apocalypses: a series of short stories, many only a few lines, that illuminate moments of vexation and crisis, revelations and revolutions. An apocalypse might come in the form of the end of a relationship or the end of the world, but what it exposes is the tricky landscape of our longing for a clean slate.

Three longer stories are equally visionary: in “Eyes of Dogs,” a soldier returns from war and encounters a witch who may in fact be his mother; “Madmen” describes an America where children who reach adolescence choose the madman who will accompany them into adulthood; in “Godzilla versus the Smog Monster,” a teenager is flustered by his older, wilder neighbor while California burns on the other side of the continent.

At once mournful and explosively energetic, One Hundred Apocalypses and Other Apocalypses makes manifest the troubled conscience of an uneasy time.

“Unforgettable voices resist description. Lucy Corin sounds like no one; prickly, shrewd, faintly paranoid or furtive, witty and also savage, she has something of Paley’s gift for soliloquy combined with Dickinson’s passionate need to hold the world at bay, that sense of a voice emanating from a Skinner box. Her achievement is already dazzling, he promise immense.”
—Citation of the American Academy of Arts and Letters Rome Prize

From Rae Armantrout to Adam Zagajewski, In the Shape of a Human Body I Am Visiting the Earth is a chorus of voices from around the globe and across generations. A compendium of some of our beloved poems from our favorite poets, this slim anthology is the perfect companion for cafés, road trips, bathtubs, shuttle expeditions, and any other situation in need of the genuinely human. Included are freshly translated masterpieces–originally published in Poetry International–from poets such as Pablo Neruda, Rainer Maria Rilke, Federico García Lorca, and Charles Baudelaire, along with new work from contemporary practitioners such as Kay Ryan, Jane Hirshfield, Derek Walcott, Kwame Dawes, Valzhyna Mort, and James Tate.